I don’t know about you, but as far as I know;  a party without a stuffed table, ain’t a party!

When the only thing that might come around is a bowl of shittie crisps and/or peanuts, that’s not the right place to be! With all due respect, but with all the amazing foodblogs online, or beautifully designed cookbooks, you should at least be able to come up with something better than that, right? It’s not that hard.

I have to admit, not everything I make turns out just as good as I wish, but without trying, it’ll never happen. And what better time to practice than for birthdays, or any other kind of party or gathering for that matter. For example, last weekend I somehow managed to stuff our whole weekend full with friends coming buy, and yes I also planned on playing the perfect housewife (which I am not, so don’t worry) by baking cakes and pies and making all kinds of salads. 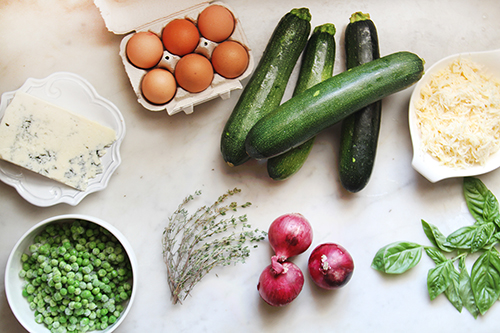 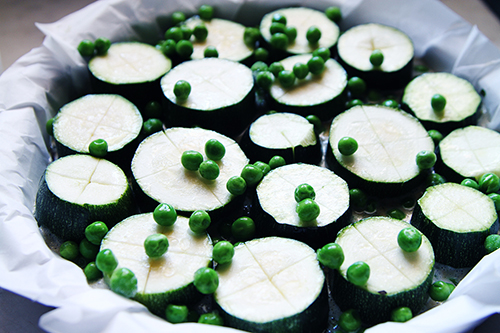 And thereby, many of our friends aren’t even vegetarians at all, which of course, is totally up to them, (really, even none of my family is!!) but it does dare me to make such good vegetarian dishes that they actually like it as much, or even better, as they would have eaten a meaty dish. Weird? I guess so. But I did it, worked my butt off in the kitchen (which was also a good thing) and all turned out amazing! And even my homemade-organic-apple-sauce-cake, which I made in the morning was truly good. (I promis, I’ll post a version of it here, soon) Although it did got stuck a bit in the bowl, and therefor didn’t look as pretty; the taste was yummie! (And I am not a big cake or pie fan, usually.)

Anyway, so we had this table full of nice and goodlooking food, (seriously, all the rainbow colours; purple, green, yellow, orange and red) and one of it was a crustless zucchini pie. ‘The way you used to make it’ my oldest said. Ahh, that was so nice, since he usually just eats, after which he disappears again. Without saing anything (nice) about the food of course. Well he’s 15. But The real nice thing on this pie is that there is no mega unhealthy and thick layer of puff pastry, which will always give you that stuffed feeling afterwards. The egg-mixture will get solid enough to hold it all together.

So here it is, from me to you, just one recipe of the stuffed table, but believe me, the rest is yet to come!