So I missed out on Valentines day again. Although, last year I was just in time to come up with this little heart-beet recipe.. this year I decided to just skip it totally. And not without a reason to be honest.

I just don’t like the way love becomes a commercial item. When you love someone, it should be called Valentines day, éveryday, right? Although, that’s what I’ve been trying, keeping this old Dutch saying in mind: it says love goes through the stomach. It sounds quite weird in English, but maybe there is a better translation for it out there. The point is, it actually says that someone who is an exquisite cook, or is able to prepare really tasty meals, should be loved for ever! (well, when that’s all we need to do..?)

I wish I could say it worked that way for my kids as well. But for some reason I still haven’t been able to turn them into vegetable loving rabbits. In the meantime, my sweet ega got totally hooked to the veggie meals, so that part is covered. But my oldest two, they are terrible where food is concerned. I sure wasn’t able to give them my veggie genes by birth, and 13 and 11 years later, it still looks hopeless. They crave for really creepy things like pizza with lots of cheese and salami sausages, for very chemical, blue coloured beverages, for loads of candy, covered in sugar, or for macaroni and cheese. Yak. Serious, they’re mine. I double checked. And when I force them every morning to drink their freshly squeezed orange juice (with lot’s of extra invisible love added) and a bowl of brainpower fruits, I sure know they hate me for the rest of the day. Which I luckily got used to as well, so I got that covered too. 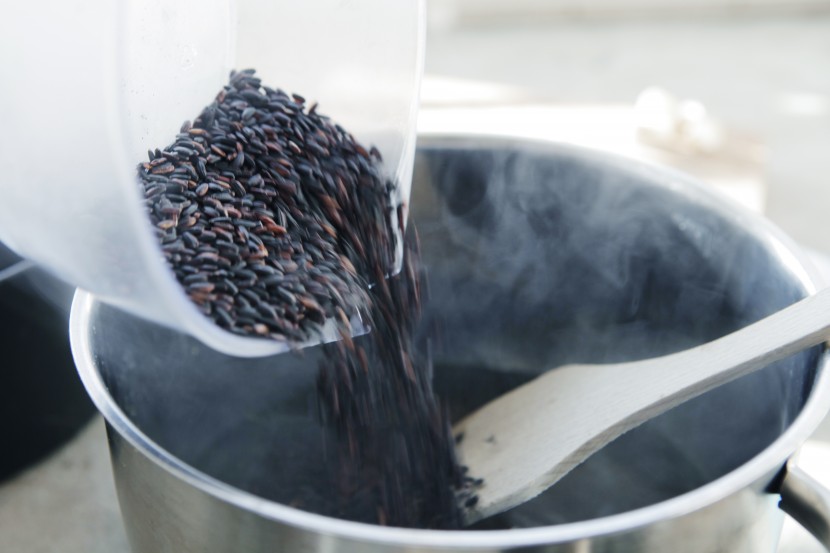 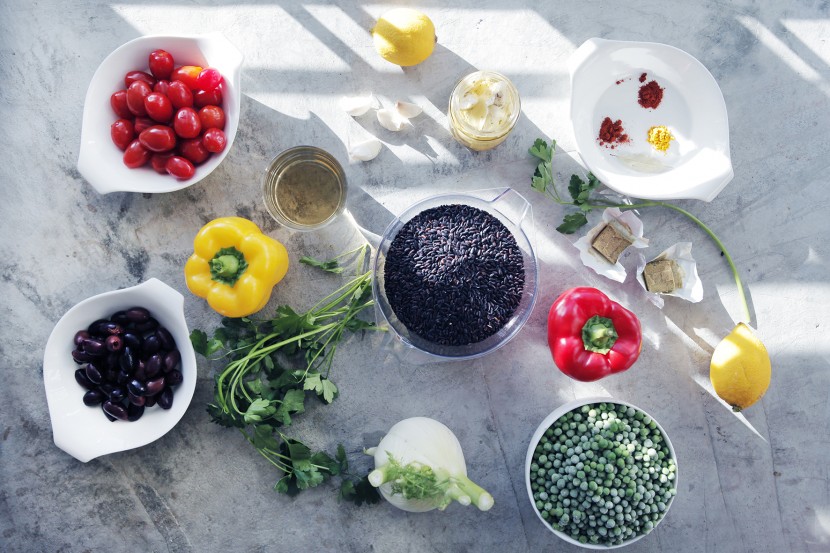 So this dish, as you can imagine, wasn’t made for them. And it sure wasn’t made for Valentines day. But this absolutely is a great recipe to try because this black rice seems to have some real nice health benefits in store. First of all, it looks amazing! The color is like a very deep ruby red or maybe even purple. But besides the looks, black rice is full of antioxidants, which help your body neutralising harmful free radicals, which may play a part in developing cancer. One tablespoon of black rice contains more anthocyanin antioxidants than a spoonful of blueberries, but less sugar and more fiber and vitamin E. This organic black rice has not been coloured afterwards (as the Italians and Spanish do for tradition with black squid ink, eew) because this rice is the same kind of sticky rice we use for sushi, but than including it’s original peel. Leaving the peel on makes it also a lot less sticky! Black rice has this wonderful nutty taste and is originally used in India, mainly in sweet dishes. Though, it tastes amazing in a savoury vegetable paella like this, the only thing you should keep in mind is that everything you cook along, gets this same dark colour too.

*I’m fan of Ottolenghi’s beautiful and tasty vegetarian book ‘Plenty’. I love his diverse and vibrant recipe’s. This recipe is based on his vegetarian paella. I have adapted it to my taste, and used some different ingredients as well as measurements.*

Directions for a Black Rice paella: